Protect Yourself: Get the COVID-19 Vaccine Learn More

Inez Ackland of Kewanee insists she would rather “go forward” than talk about the past. Inez turned 100 years old on Feb. 6. “When I celebrated my birthday, it was snowy out. Everything was shut down,” she said. “We had a gathering at the church, just the family who could get there. “A lot of folks would have shown up if they could, but I got 140 cards. If all those people showed up, but there wouldn’t be much time to talk. This way, I have cards to go back and read. It was God’s plan. We had a beautiful little service at the church.” Ackland and her family farmed in Bureau County, Ohio Township north of Princeton.

She said she has been a seamstress all her life, doing embroidery, sewing and fancy work. She has done a bit of traveling, visiting Sweden three times. Before moving to Kewanee 14 years and two months ago, she was living alone in a big house in Rochelle. “My son was living here, with his family and he wanted me down, here’, she said.

As for communicating with the younger generation, Ackland said, “It’s hard to ex-plain how I feel because I didn’t grow up the way they’re growing up. It’s hard to communicate. I can see where they’re coming from because I’ve been through it, but they’ve never been 100.” She keeps busy with reading and doing puzzles, and although she doesn’t find much, worth watching on television, she keeps up with the news. “I don’t like it,’ she said, ”but I don’t want to be ignorant. And I’ll deal with the politicians when they settle down.”

Ackland said she has no aches or pains, and she is careful to only do what she feels capable of. “I take a day at a time. I listen to God, and let Him deal with me,” she said. “I don’t know why I’m still here, I don’t. But He keeps me going and I rely on Him.”

Edna Schuetts has lived within 10 miles of Kewanee all of her 104 years. She came to live in Kewanee 14 years ago. “I was born and lived on a farm,’ said Schuetts, “and we farmed all our married life. We had Angus cattle, hogs and chickens.” Born in December of 1910 in Burns Township, Schuetts has attended the State Road Community Church for 95 years. “I started Sunday school there when I was 10 years old,” she said.

Schuetts helped with bazaars doing handwork, helped with bake sales, belonged to a circle and over the decades has sewed a lot of carpet rags. Schuetts had two children. Her son passed away 20 years ago at the age of 59. “That’s the sad part of living this long,” she said. “My whole immediate family, my sisters, are all gone. But I have a lot to be thankful for.” Schuetts has a daughter who lives in Rockford. She also has five grandchildren.

Having lived on a farm for most of her life, Schuetts said she misses the animals. “It’s been quite a change,” she said. Every farmer had some hogs, chickens and cattle. Now you don’t see any of that. “Farming has sure changed. I just can’t visualize the machinery and the like. It’s a big business today.”

Schuetts keeps up with what’s going on in the world, and still reads a lot. “You have to keep interested,” she said, adding, “I guess the farm is always in you. I’m interested in how the corn is growing. “I do very well. I can’t complain. There are two ways to look at Living this long, but you have to be thankful for what you have. 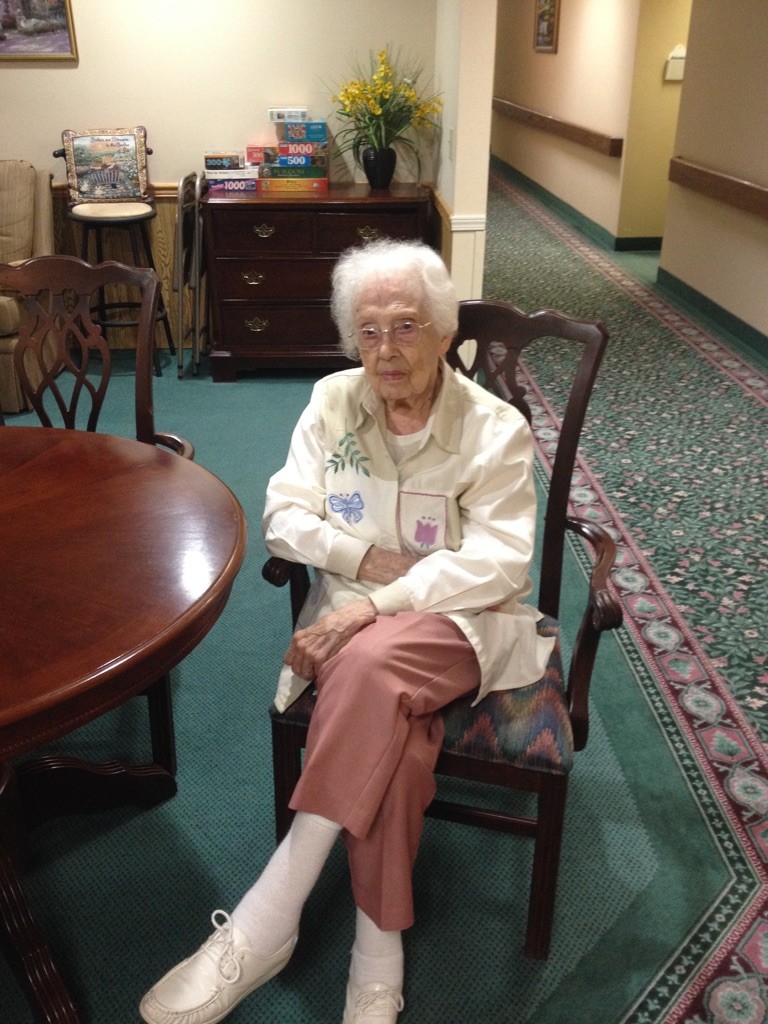